It’s hard to talk about your sex life with a total stranger.

No one teaches us how to talk about sex, vulnerability, or deep emotional connection when we’re kids. We grow into adults who don’t know how to talk about our sexual and relationship problems. We try to Google our way to meaningful answers, but at the end of the day, what we really need is a safe, caring human to talk to for support.

That’s why we created The Center for Couples & Sex Therapy. We’re a group of safe, caring humans who also have a massive amount of professional training and experience talking about taboo sexual topics and helping partners navigate complex, deeply personal relationship issues.

The Center has provided speciality couples counseling and sex therapy services to residents in Oregon and Washington since 2015. We are passionate about this work and feel immense gratitude when our clients entrust us with the most vulnerable parts of themselves. We can’t promise that the work will be easy, but we can promise that we’ll meet you with support, compassion, and expertise each step of the way.

Your relationship and sexual
health are our top priority.

You deserve a specialist, not a generalist. We are laser-focused on treating relationship distress and sexual concerns. Rest assured, when you work with us, you’re working with the most dedicated and well-trained therapists in town.

We’re committed to personal development. We’d never make your session about our personal issues, but we want you to know that we’re committed to doing our own personal work to ensure we’re showing up for you as the best version of ourselves. Land Acknowledgment and Gratitude to Our Native Communities

We acknowledge that Portland, OR, has the 9th largest Urban Native American population in the U.S., with over 380 federally recognized Tribes represented in the Portland Metropolitan area.We also acknowledge the systemic policies of genocide, relocation, and assimilation that still impact many Indigenous/Native American families.

The Portland Metro area rests on traditional village sites of the Multnomah, Wasco, Cowlitz, Kathlamet, Clackamas, Bands of Chinook, Tualatin, Kalapuya, Molalla, and many other tribes who made their homes along the Columbia River, creating communities and summer encampments to harvest and use the plentiful natural resources of the area. 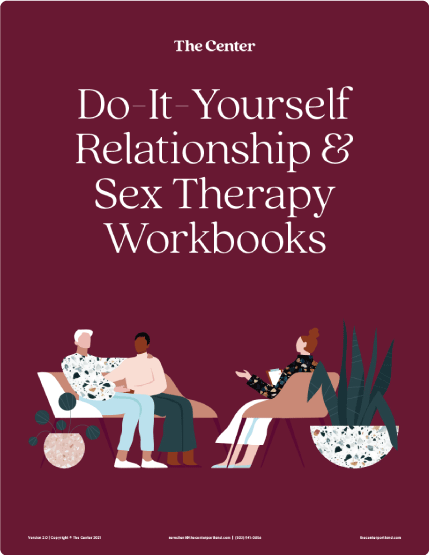 Improve Your Relationship Without Paying a Therapist

Need help but not ready for therapy? We’ve got you!
Our free workbooks are full of therapist-approved advice to help you create the loving relationships and positive sexual experiences you deserve.

Please note this form is not encrypted communication. If you have any concerns about your privacy, please contact us via telephone by calling (503) 941-0856. We will respond to your inquiry within 48 business hours.

We will respond to your inquiry within 48 business hours.